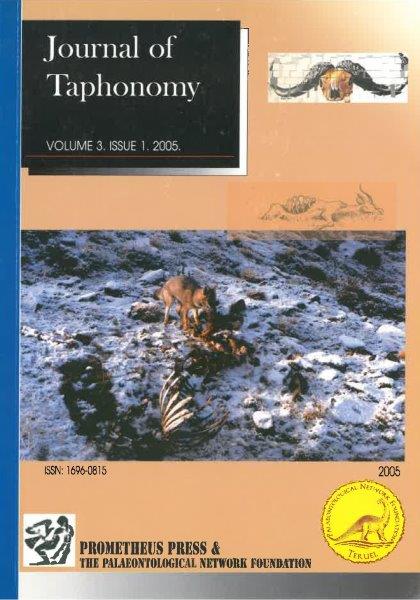 Analysis of Bone Modifications of Bubo virginianus’ Pellets from Argentina.

Two samples of pellets belonging to Bubo virginianus were collected from two different environments in Argentina. One of them was produced by experiment using a captive individual in the County Zoo. The other sample was obtained from a wild exemplar in the province of Catamarca. Both samples were analysed together with the aim of categorising the total sample of Bubo virginianus obtained in Argentina. The main goal of the work presented here is to find the necessary tools to analyse the possible activity of predators both in the paleontological and the archaeological record in the Pampean region. The methodological procedure used was the one designed by Andrews (1990) for predators of the Northern Hemisphere. The modifications produced by the two individuals allowed the categorisation of the Bubo virginianus as a predator of Category 2. The sample was compared with the results of other species which were presented in bibliography from different parts of the world, and with the results of some species from the Pampa region, such as Tyto alba, Asio flammeus and Athene cunicularia, and especially other species from the same genus Bubo.

The Taphonomic Relevance of the Analysis of Bovid Long Limb Bone Shaft Features and Their Application to Element Identification: Study of Bone Thickness and Morphology of the Medullary Cavity.

Recent debates on equifinality processes involved in skeletal part analyses have shown the accuracy of MNE identification by using long limb shaft fragments. Given the taphonomic and behavioural relevance of elaborating accurate skeletal part profiles at archaeological sites, the present work will show a combined set of features used to identify elements from shaft specimens. Landmark features (already in use by several researchers) are combined with shaft thickness/shape and with new diagnostic characteristics of medullary surfaces, which enable researchers to identify most of the shaft fragments from bovid animals that can be found in archaeological assemblages.

Bone accumulations at five brown hyena den sites representing two clans in the Makgadikgadi Pans region of northern Botswana were studied. Our intent was to assess the correlation between the taxonomic abundance at these den sites and the local faunas. Our statistical interpretation shows that such accumulations significantly correlate with the local fauna. A previously proposed criterion which suggested a carnivore representation of 20 % or more of the total Minimum Number of Individuals (MNI) at hyena-accumulated assemblages is re-assessed. The use of this criterion is important to assess the involvement of hyenas as accumulating agents in bone assemblages of unknown origin. We suggest that bone accumulations created by different hyena species may not always meet the proposed criterion. This is probably because of behavioral differences between hyena species. In agreement with other studies, we observed that juvenile brown hyenas are widely represented in the accumulations and that there is a high percentage of bones showing carnivore damage. We conclude that fossil assemblages purportedly accumulated by brown hyenas do provide information about the predominant ungulate taxa in the area and thus, the overall habitats. 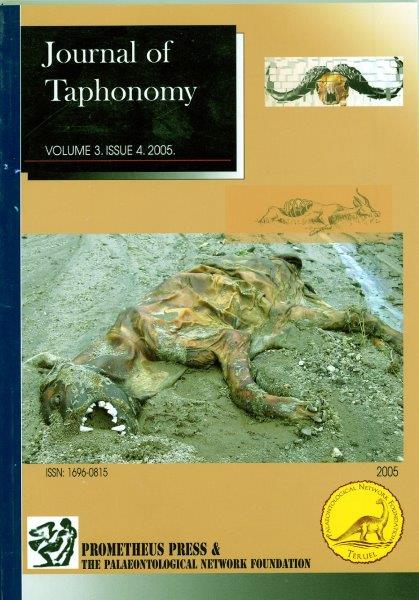 Computerized tomography (CT) has been used to address many diverse issues within several subfields of paleontology since its development in the 1970s. Here, an extension of CT based paleontological analysis is described that applies this technology intra-dentally in an attempt to mediate some of the difficulties posed in directly comparing hypsodont dental specimens that exhibit differing degrees of occlusal wear. As a case study, this report describes the use of CT scans to produce virtual occlusal wear on several third molar specimens of the extinct suid, Metridiochoerus andrewsi, from the Gondolin GD 2 South African Plio-Pleistocene faunal assemblage. The GD 2 assemblage has yielded a number of M. andrewsi third molar specimens, including several that exhibit only superficial occlusal wear which limits assessment of their occlusal morphologies. The resulting CT scanned teeth from the GD 2 assemblage are compared both to other more heavily worn third molar specimens from the GD 2 deposits, as well as to M. andrewsi third molar specimens from the Swartkrans Member 1 assemblage. Results indicate that once the appropriate CT slice level has been selected, individual specimens exhibiting essentially any occlusal wear stage can be directly compared to one another. The methodology described here has applications for virtually any taxonomic group with hypsodont dentitions and will provide a useful tool for more accurate specimen identifications, for assessing changes and intraspecific variation in occlusal surface morphology throughout wear, and for potentially understanding the variation, evolution and functional significance of hypsodont dental morphologies among certain taxa.

Dragging and Scattering of Camelid Bones by Fluvial Action in the Real Grande Gorge, Province of Catamarca, Southern Argentinean Puna.

Research carried out in the southern sector of the Puna de Atacama, Argentina, enables taphonomic hypotheses concerning bone scattering and the fossil record to be tested. To that end, this study is based on bone samples from modern camelid (Lama sp.) carcasses. In the first stages of research I evaluated the role played by disarticulation and fluvial transport in relation to different skeletal elements. Subsequently, I tested the various sedimentary contexts where the bones were buried and their relative importance in the different topographic localities. In certain areas of the vega hydraulic transport power decreases in relation to certain topographic accidents and patches of vegetation that act as a retaining wall. The reduction of this form of transport produces bone sedimentation. As such, there is the possibility of elaborating certain expectations, when possible, for the formation of a future fossil record in some sectors of this environment. Without underestimating the importance of previously developed fluvial bone transport models, my research favours a model in which some skeletal parts are more affected by transport than others, allowing us to determine the existence of different patterns of bone scattering and fossil assemblage in this area. In brief, this article produces preliminary empirical evidence for fluvial transport of camelid bones in the high desert, evidence which could be used as an indicator of original conditions in environments where bones were accumulated and became fossilized.

We present the results of a detailed taphonomic and zooarchaeological study of the faunal remains from the late Middle Palaeolithic (LMP) and early Upper Palaeolithic (EUP) bone assemblage of Ortvale Klde, Georgian Republic. A series of taphonomic tests and analyses are employed to reconstruct the depositional history of the bone assemblage and investigate LMP (Neanderthal) and EUP (Modern human) hunting and subsistence strategies. We identify the maximum number of skeletal elements, document bone surface modifications, the mode of bone fragmentation, and the demographic structure of the main hunted ungulate population. The assemblage is characterized by significant density-mediated biases, yet in situ attrition and carnivore damage play a minimal role in assemblage formation. Data suggest that most bone destruction occurred during site occupation, probably in relation to marrow consumption as indicated by the mode of bone fragmentation. Caucasian tur (Capra caucasica) is the major prey species throughout the LMP and EUP, and body part representation, the absence of selective transport, and butchery marks from all stages of carcass processing suggest that Caucasian tur were subjected to extensive handling. Analysis of Caucasian tur dental eruption and wear indicates that prime-age adult individuals dominate the assemblage. The results of this study, the first zooarchaeological and taphonomic study carried out on a Palaeolithic bone assemblage from the southern Caucasus, indicates that hunting strategies and meat processing behaviors were not significantly different between Neanderthals and Modern humans.