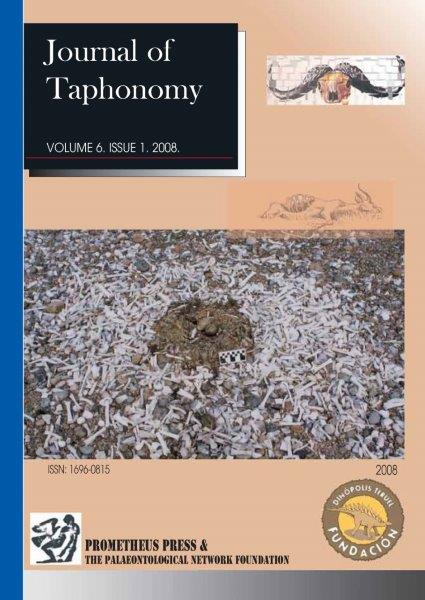 Localised deposits of Late Pleistocene and Holocene bird bones occur in wetlands throughout New Zealand. These are characterised by dense accumulations of mostly disarticulated bones, with assemblages dominated by large, flightless bird taxa; in particular the extinct ratite moa (Aves: Dinornithiformes). A wide range of deposition mechanisms were historically proposed for these sites, including large floods and stampedes during wildfires. We outline a simple method for analysing the orientation and spatial distribution of bones within these deposits using GIS software, and apply this method to the interpretation of three such deposits from South Island, New Zealand. The results are consistent with non-catastrophic, periodic miring of individual moa. Long bones within these sites were preferentially orientated and subhorizontally inclined, indicating post-deposition disarticulation and movement of the bones within the sediment by sediment liquefaction and raking from the legs of mired birds, with a possible influence from water flow. Small, light skeletal elements were significantly under represented in the deposits. This may be due to post-mortem scavenging or weathering of vertebra and crania, 'pumping' to the surface of light, buoyant elements during liquefaction events, or crushing of these elements by subsequently mired birds.

An Approach to the Study of Variations in Early Stages of Gallus gallus Decomposition.

We explored decay rate dynamics in the early decomposition process of Gallus gallus. Our initial hypothesis was that the variation of the mass decay rate is sensitive to the alterations experienced by the carcass during decomposition. In order to establish a framework for the different patterns of carcass alteration, a sample with successive ontogenetic stages (from embryo to adult), set in three environmental conditions (subaerial, burial, and water-submerged), was examined over an 18-day experimental period. Values of the average mass loss and decay rate, and a measure of the overall decomposition rate (

The Taphonomy of the Pliocene Microfauna from Kanapoi, North-Western Kenya.

A taxonomic and taphonomic study was carried out on two assemblages of microfauna from the Pliocene locality of Kanapoi in north-western Kenya, in order to understand the agent/s responsible for their accumulation and the taphonomic processes that have influenced the assemblages. The two sites, namely, Nzube's Mandible Site and the Bat Site have yielded microfaunal remains comprising largely rodents and bats. The fauna at Nzube's Mandible Site derives from the same site as the holotype mandible of Australopithecus anamensis and comprises largely murids, while that from the Bat Site consists largely bats. Characteristics of the assemblages such as the high representation of nearly all skeletal elements suggest that, although pre- and post-depositional processes caused damage to the faunal remains, overall the samples are a fairly true reflection of the original assemblages that accumulated at the sites. Further, the high representation of virtually all skeletal elements, the minimal degree of etching among the murid incisors, and the high faunal diversity, particularly at Nzube's Mandible Site, indicate that the two assemblages accumulated in situ by way of predation. Even though several predators may have been involved, the barn owl (Tyto alba) or the giant eagle owl (Bubo lacteus), are the most likely accumulators of the two assemblages. 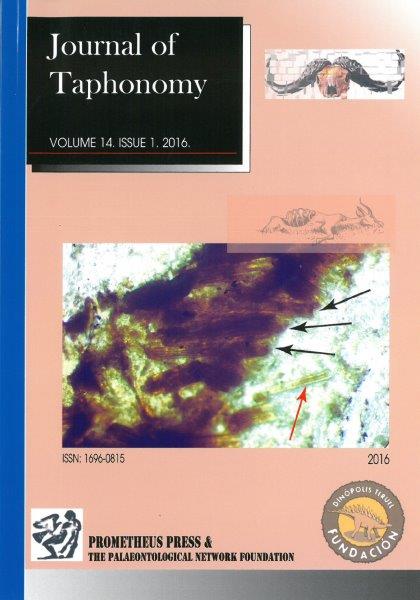 The Application of Digital Reconstruction Techniques in Taphonomy of an Upper Cretaceous Dinosaur Site in Eastern Wyoming.

High-resolution Global Positioning System (GPS) technology, together with Geographic Information Systems (GIS) software provide powerful new tools for the taphonomist. We have applied these techniques in our research on a massive Upper Cretaceous dinosaur bonebed in the Lance Formation in northeastern Wyoming, permitting centimeter accurate photographic reconstructions of the features of the quarry essential for taphonomic study. We can then query the resulting three dimensional mapping and answer essential taphonomic questions after returning from the field. We are able to process over two thousand specimens from a typical season’s excavation and convert the data into accurate and addressable virtual quarry maps. Using the resulting quarry maps, we can visualize the positions of every bone. The maps and photographs and data on the specimens are available on the internet so that the integrity of the taphonomic data, now in excess of sixteen thousand specimens, is assured for the future.

An Experimental Approach to Orientation Patterns in Trampling Processes and its Relevance to Site Formation Processes.

The study of orientation patterns is becoming a trend again in early Pleistocene archaeology. Anisotropy and isotropy can result from different biotic and non-biotic processes. Here an experiment was conducted in order to distinguish how trampling processes modify the orientation patterns of random bone distributions. After submitting 80 bones to the action of directional trampling, we have been able to verify the correlation between the trampling direction of trampling and the existence of anisotropy. This shows that physical and biotic processes in addition to water disturbance can generate anisotropic distributions.

During the last decades, archaeological research has demonstrated that hunting and primary access to animal resources have been a recurrent feature of early human behaviour. In addition to confirming this behavioural pattern, data from later Palaeolithic sites can be analysed to provide insights on the specific dynamics of human practices and how they inform subsistence strategies. Of particular interest are discussions on opportunistic versus selective hunting strategies, as well as the prey selection criteria that early human populations followed, if any, in the Palaeolithic period. We address these research questions throughout the paper, focusing on the second half of the Late Pleistocene in the Northwest of the Iberian Peninsula. We consider a sample of twelve archaeological and palaeontological sites from a bibliographical perspective. The results analysed suggest that the prey selection strategies adopted by Palaeolithic hunter-gatherers were influenced by a series of palaeoecological and sociocultural contexts, such as landscape, geomorphology and topography, seasonal prey mobility, and human mobility patterns. We suggest that the discussion is hindered by issues of data resolution, which can be improved through taphonomical analysis of the assemblages under consideration. Other limitations are derived from the incomplete nature of the available evidence, that are to be addressed through further future fieldwork.

The Taphonomist´s Corner: First evidence of hair protospines in the fossil record.