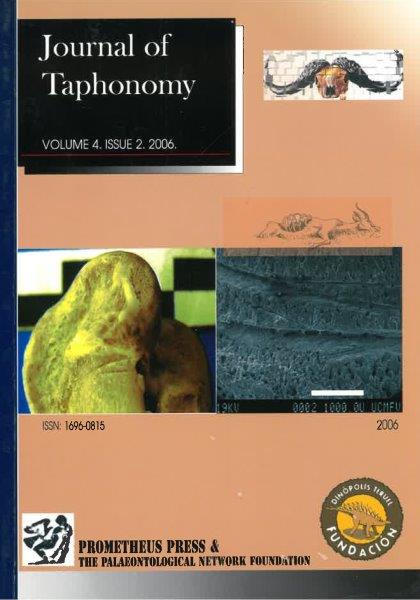 A strong pattern of high hindlimb representation (especially tibiae) was recognized in our survey of
zooarchaeological analyses that included limb bone shafts in estimates of element abundance in
assemblages from the Old and New Worlds, from widely spread time periods and with various hominid
species that acted as bone accumulators. Inter-element differences in bone mineral density and carcass
transport behavior by hominids do not explain the pattern satisfactorily. We hypothesized that shaft
fragments of hindlimb elements (especially tibiae) might be more “intrinsically identifiable” than are
fragments from other limb bones, and constructed an experiment to test this idea. Whole limb bones
were sectioned into shaft fragments of various sizes using a bandsaw. An experienced faunal analyst
(TRP), who was uninvolved in the bone selection and preparation, was required to identify the fragments
as accurately as possible to specific skeletal element. Identification bouts were divided into 14 individual
sorts, each consisting of 24 randomly assigned specimens. Sorts were constructed to replicate an
increasing degree of communition across three stages: two “Stage I” sorts contain large specimens, four
“Stage II” sorts contain smaller specimens and eight “Stage III” sorts contain the smallest specimens.
Refitting and guessing were not allowed and fragments identified to a non-element-specific category
(i.e.: upper limb segment, humerus or femur; intermediate limb segment, radius or tibia; lower limb
segment, metacarpal or metatarsal; limb bone shaft only) were not counted as a correct identification.
Of 336 total specimens, 195 (58.0 %) were correctly identified to element. Overall, the differences in
proportions of skeletally identified fragments for all six elements are not statistically significant. This
finding seemingly falsifies the hypothesis that shaft fragments from hindlimb elements (especially
tibiae) are more intrinsically identifiable than are fragments of other limb bones. However, our study
also highlights the need for additional testing of the hypothesis since most actual archaeofaunas preserve
many more specimens with complete or nearly complete diaphyseal circumference than does our
experimental sample, which is composed entirely of specimens with preserving <50 % of their original circumferences. Our results suggest that bone specimen cross-sectional information, mostly lacking in the experimental sample but not in real archaeofaunas, is one of the most important classes of data on which accurate identification of shaft fragments are made.