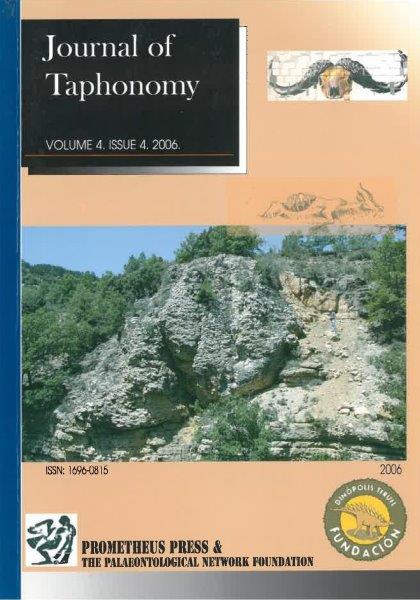 Eighty percent of 74 fragmentary cranial and postcranial bones of the Upper Pleistocene woolly rhinoceros Coelodonta antiquitatis (BLUMENBACH 1799) from the Lower Weichselian (65.000-90.000 BP, OIS 5, Upper Pleistocene) ice age spotted hyena open air prey deposit site Biedensteg at Bad Wildungen (Hessia, NW-Germany) exhibit crack, bite and nibbling marks. The skeletal remains represent at least five woolly rhinoceros individuals. Individual carcasses of an early adult female and a calf have been identified. Both show carcass disrupting and destruction by the hyenas in form of partly articulated bones, bone cracking, nibbling and chewing. Articulated parts of the skeletons were removed from the carcass and were stored in mud pits with other prey bones. The long bones, which are filled completely by the bone spongiosa, were generally not cracked, but are always gnawn intensively starting from the joints, while the hyenas mostly left the bone shaft intact. Such bone spongiosa was also not uncommon in hyena coprolites at the site. Typical bone destruction stages are represented. Those described in detail here include the cranium, scapula, humerus, ulna, radius, femur, tibia, pelvis but also vertebrae and costae. The woolly rhinoceros bones at the Bad Wildungen-Biedensteg freeland prey deposit site take 53% of the prey animal bones of Crocuta crocuta spelaea (Goldfuss 1823) and prove with other prey bones a mixed feeding onto all huge ice age mammals. Remains of Mammuthus antiquitatis, Bison priscus, Equus ferus przewalskii, Megaloceros giganteus, Rangifer tarandus, Ursus spelaeus and C. c. spelaea itself are included in the hyeana-modified fauna with 5-12% each showing signs of scavenging. The high percentage of the Coelodonta bones results more of the fact, that those are, such as mammoth bones, the most massive ones of ice age animals. The taphonomic comparison of C. antiquitatis carcasses and bones of Westphalian cave and freeland hyena den and prey deposit sites indicate the most important destruction impact of woolly rhinoceros carcasses by the Upper Pleistocene spotted hyena.

Examination of acid digestion residues can be an indispensable tool in the detection and identification of fragmentary remains of rare and/or fragile, macroinvertebrate fossils preserved in shallow shelf carbonates. We recovered submicroscopic fragments of phosphatic conulariid, Sphenothallus (Cnidaria), and ?Trematis (Linguliformea) skeletons from a slab of highly fossiliferous lime packstone from the uppermost Brainard Shale Member of the Maquoketa Formation (Richmondian, Upper Ordovician) of northeastern Iowa, USA. The bedding planes of this and four similar Brainard Member slabs (total upper bedding surface area approximately 0.38 m2) lack macrofossil specimens of these three taxa, which have never previously been reported from this rock unit. Analysis of the preservation of the abundant calcitic fossils revealed evidence of wave current action, including pervasive disarticulation of the brachiopods, echinoderms, and trilobites, and bimodal alignment of the narrowly conical Cornulites shells and elongate Eoplectodonta valves, almost all of which are also oriented convex up. These results are consistent with the hypothesis that storm wave activity on the Brainard Member sea floor fragmented originally macroscopic conulariid, Sphenothallus, and ?Trematis skeletons, making it difficult to detect these taxa at low magnifications and thus making it appear that they were absent in the original bottom community. Together with results of similar studies of other Paleozoic rock units, our investigation suggests that there is a systematic, taphonomic bias against conulariids, Sphenothallus, and linguliform (phosphatic) brachiopods in storm-influenced shelf deposits.

Plant remains contained in carnivore scats from Puna rockshelters in the Argentinean Andean Puna are analysed. Only 31% of the scats (n=16) contained plant remains, all of them corresponding to the Poaceae family. Most of these are leaf and culm parts, and only in one case seeds were identified, possibly also corresponding to the same family. The lack of fleshy fruit seeds suggests a different pattern of plant intake as compared to other areas, possibly just for purging here. Plant anatomical structure has suffered no damage from digestive acids but some softening, and all anatomical features are perfectly recognizable. Plants can thus then enter the fossil record in rockshelters in the region via carnivore scats, and this should be taken into account, especially as these are the same kind of plants most commonly introduced by humans in the past according to the regional archaeological record.