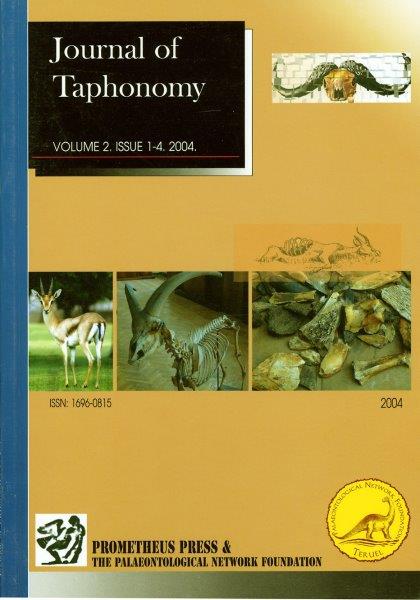 This paper introduces a collection of 11 papers originally presented in a symposium held at the 2004 meeting of the Society for American Archaeology. The papers debate and propose solutions for multiple aspects of equifinality in ungulate skeletal part studies and focus on four primary themes: (1) theoretical issues of equifinality; (2) methods for generating skeletal part frequencies; (3) the tools for analyzing skeletal part frequencies; and (4) attritional biases caused by natural and cultural taphonomic agents. Although debate continues over the methods used to quantify and analyze ungulate skeletal parts, most participants agree on the need for detailed publication of raw bone portion counts and bone portion coding and quantification methods.

The Concept of Equifinality in Taphonomy.

Most analyses of relative skeletal abundances in archaeological contexts are based on units derived, in one way or another, from the number of identified specimens (NISP): the minimum number of elements (MNE), the "minimal animal unit" (MAU), and the skeletal-element based minimum number of individuals (MNI). MNE values can be interpreted as if they were the results of a sampling exercise, telling us the chances that specimens drawn from a population of NISP values match in some specified way. Since this is the case, MNE values should scale to the NISPs for the body part involved. Since MAUs are generally calculated by standardizing MNE values by the number of times the part occurs in the skeleton, and MNIs by a combination of this and both age- and side-matching, there should be a very predictable relationship between the values of NISP, MNE, MAU, and MNI within any given assemblage. Using a series of assemblages from South Africa, Iran, and France, we show that this is, in fact, the case.

Distinguishing Selective Transport and In Situ Attrition: A Critical Review of Analytical Approaches.

Skeletal element frequencies are at once enticing sources of behavioral information and thorny taphonomic dilemmas. Many archaeofaunal assemblages combine some degree of selective transport and in situ attrition, both of which affect the relative representation of elements. In addition, some analytical methods may add their own signature, further complicating the analysis of the element profile (Marean et al., this volume). Three methods have been applied to the problem of distinguishing attrition from selective transport: the Anatomical Region Profile (ARP), the Analysis of Bone Counts by Maximum Likelihood (ABCML), and the high and low survival element set model. We find that the ARP technique fails to perform as suggested. The ABCML is an innovative and promising line of inquiry, but is currently limited by methodological and theoretical shortcomings. The high and low survival set model appears to be an effective approach to analysis, but the actualistic tests of its power are still limited. We conclude that sensitivity to the issue of differential intra-element survival is key to future research into this problem.

Skeletal Element Equifinality in Zooarchaeology Begins with Method: The Evolution and Status of the «Shaft Critique».

The most common pattern of skeletal part representation described for zooarchaeological assemblages is a head-dominated or head and foot-dominated sample (Type II assemblages). Although an important early study by C.K. Brain (1969) suggested strongly that such a pattern might be mediated by skeleton-wide variation in bone density, this conclusion was under-appreciated for nearly twenty years. Instead, a majority of researchers working on Type II assemblages that are widely separated by geography and archaeological time argued in each case that the pattern was a by-product of foraging strategies used by hominins. In response, a small group of researchers expanded on Brain's pioneering work, concluding that the Type II pattern is actually instead a methodological artifact caused by (1) a combination of taphonomic factors that selectively destroy bone portions based on relative density and (2) analytical procedures that subsequently selectively bias against those same bone portions. Here we discuss in detail specific methodological and data recording recommendations that should eliminate the identified analytical problems and assist zooarchaeologists in assessing the degree of bias in the published work of other researchers.

The Fallibility of Bone Density Values and Their Use in Archaeological Analyses.

As a proxy measure of resistance to destructive processes, bone density has played a central role in the discussion of equifinality and faunal representation. Bone density data sets have been derived for a diverse range of species, providing zooarchaeologists with a framework for assessing the occurrence of density-mediated destructive processes. These data sets vary tremendously in accuracy. In addition, the representation of the density of a bone portion as a single number -while convenient for quantitative analyses- obscures by oversimplification the many factors that affect the derivation of density values, a complicated process subject to multiple potential sources of variation and error. Density data sets and methods of quantitative analysis must be chosen with care, and the reasons for these choices made explicit. At the same time, it must be recognized that, despite the amount of attention that it has received, density is only one of many variables that affect the ability of a bone to restrict destruction.

Biases in ungulate body part representation in archaeofaunas potentially reflect human foraging decisions. However, the signatures of density-mediated attrition of body parts and human selectivity in response to nutritional content can overlap to a significant extent. Zooarchaeologists' techniques for analyzing skeletal representation for density-dependent biases must either address differential resistance among distinct skeletal macro-tissue classes, or compare skeletal representation within a narrower density range that is widely distributed in the skeleton. This presentation examines the potential comparability of bone density parameters obtained by photon densitometry (PD) and computed tomography (CT) within limb elements and across regions of the whole skeleton. "Unadjusted" parameters obtained by PD and CT techniques are in reasonably good agreement, and these parameters yield similar results when applied to patterns of skeletal representation in Mediterranean faunas generated by Paleolithic humans and Pleistocene spotted hyenas. More significant than the technique for measuring density in modern mammal skeletons is whether the density parameter values have been adjusted, arguably to compensate for problems of shape and the presence of large internal voids in limb bone tubes. The results of systematic comparison of density parameter variation among published sources, and their application to prehistoric cases accumulated by diverse agents, contradict the great preservation differential between spongy and compact bone specimens suggested by certain captive hyena experiments and the Mousterian fauna from Kobeh Cave (Iran). Only the adjustments made to the CT parameters for limb shafts (BMD2) accommodate the latter cases.

Body part representation is often used to identify site function, particularly transport to or transport from kill sites. Taphonomic research has indicated that a number of pre- and post-depositional agencies can result in similar part representation, largely a function of bone density, which can be measured in a variety of ways. A number of procedures for measuring bone density are discussed and applied to a late Upper Paleolithic faunal assemblage from Verberie, France. Comparisons of those densities with percent survivorship of reindeer bones from the archaeological site indicate that density-mediated attrition, most commonly associated with equifinality, is not primarily responsible for the skeletal element representation. A reverse bulk utility curve suggests that high and medium nutritional value skeletal elements were removed from this hunting site for subsequent processing and consumption elsewhere.

The history and development of skeletal part abundance studies is briefly discussed. Two principal strands of this sub-discipline are the application of indices of food utility and bone mineral density to the interpretation of skeletal part abundance patterns. Both food utility and bone mineral density indices are derived from modern observations, underwritten by uniformitarian assumptions, and are used to model behavioural and taphonomic patterns in the selection and survival of bone elements. The application of such models is critiqued. It is argued that, whilst such models remain extremely valuable, they will always suffer from equifinality with regard to end interpretations. The solution to this problem does not lie in improving these models, or the data they derive from, though this may be desirable, but in the more time-consuming option of improving the resolution of archaeologically observed data. Several ways of doing this are briefly discussed. One of these options, fracture and fragmentation analysis, is outlined in detail. Sample applications of such an approach are presented and discussed. These include the use of fracture and fragmentation analysis to identify specific practices that can severely skew skeletal part abundances, such as bone grease rendering, and the identification of levels of pre-depositional and post-depositional fracturing within the taphonomic history of bone assemblages.

The Derivation and Application of White-Tailed Deer Utility Indices and Return Rates.

Beyond Cautionary Tales: A Multivariate Taphonomic Approach for Resolving Equifinality in Zooarchaeological Studies.

We describe a multivariate approach that reconstructs the taphonomic histories of zooarchaeological assemblages. The approach applies a sequence of zooarchaeological analyses to bone assemblages to determine the most significant agents of assemblage formation. By examining the differential survivorship of bones from subgroups within an assemblage, problems of equifinality in skeletal part studies can be overcome. The multivariate approach follows three primary analytical stages including: a) a descriptive stage that summarizes the representation of key taphonomic variables of each assemblage; b) an analytical stage that investigates the completeness and fragmentation of skeletal parts; and c) a comparative stage that evaluates taphonomic variation amongst subgroups within a zooarchaeological assemblage. In a case study of six Epipaleolithic assemblages from the southern Levant, the multivariate approach reveals that intensive bone processing by humans for marrow and possibly grease was the primary determinant of gazelle bone survivorship, while small game taxa experienced independent taphonomic histories.

Assessments of site seasonality have increasingly relied upon three methods: 1) the presence or absence of seasonally available fauna, the oldest, most widely-used approach; 2) the population structure method, which relies upon the seasonal variation in the age and sex composition of the animals exploited; and 3) techniques such as skeletochronology or dental growth-increment studies. With all three methods, issues of equifinality result from the variability in body part representation. Cultural actions such as differential transport, modes of butchery, storage and culinary practices, in addition, natural taphonomic agents, also result in uneven body part representation, which can lead to false seasonal patterns. The consonance between different seasonality data for caprines and fish suggest that spring to fall occupations must have played a serious role in shaping the Neolithic animal bone deposits from Ecsegfalva 23, Hungary. Tooth sectioning data on caprines add late winter to this time interval. Finally, the broad seasonal spectrum of avian remains is potentially indicative of a year-round occupation.