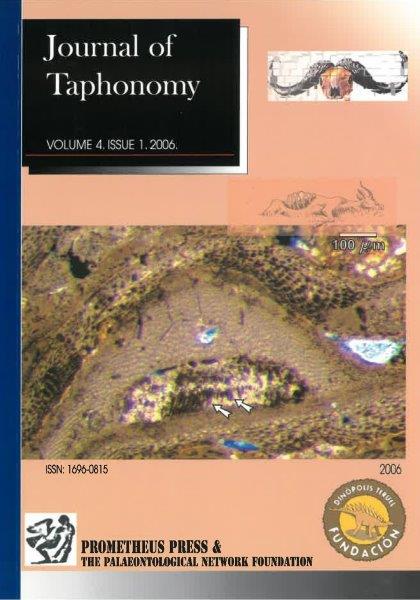 Dissolution Behavior of Calcareous Nannoplankton and Possible Alteration of Their Assemblages.

The Taphonomy of the Micromammals from the Late Middle Pleistocene Site of Hoedjiespunt 1 (Cape Province, South Africa).

The palaeontological site of Hoedjiespunt 1 (HDP1) has been dated to the late Middle Pleistocene. The rich mammalian fauna, recovered from the site, including four hominid teeth, is believed to have been accumulated by a hyaena. Micromammals were recovered from within the same horizons as the macro fauna. Previous analyses of the micromammals from the hyaena lair did not include a taphonomic analysis, and the agent of accumulation was assumed to be the hyaena responsible for the accumulation of the larger mammals. This assumption had not, however; been verified by a taphonomic analysis of the micromammal assemblages. A taxonomic and taphonomic study was thus carried out on the HDP1 micromammals in order to identify the predator(s) or agents responsible for the micromammal accumulation, and to evaluate the suitability of the assemblage for palaeoenvironmental analysis. The general pattern of species distribution of the murids from the two main fossil-bearing horizons at Hoedjiespunt 1 suggests that the micromammals have come from the same, original assemblage. The similarity observed in the micromammal taxonomy of these horizons is echoed in the taphonomy. The digestion on prey incisors, together with the range and activity patterns of prey species, suggests that the predator responsible for the fossil accumulation was a barn owl. The assemblage may provide a brief window into the micromammal population living on the west coast, in the immediate vicinity of the site, during the late Middle Pleistocene.

Middle-Range Theory in Paleolithic Archaeology: The Past and the Present.

Middle-range theory (MRT), as the concept of intermediate theory between observed empirical data and general theories, was first formulated by the sociologist R.K. Merton in the context of the positivist waves of the 1960s as a reaction to the doctrinaire and descriptive paradigms of previous decades. Among the first archaeologists to employ this concept was L.R. Binford, whose work was particularly influential in the subsequent development of MRT in archaeology. Understanding site formation processes and the mechanisms responsible for generating, modifying and destroying traces of the past has been equated with MRT, particularly in Paleolithic archaeology. The development of MRT has played a crucial role in the formation and elaboration of field techniques, research designs, and new methodologies and, as such, has stimulated new directions and new questions in Paleolithic archaeology. This paper elaborates the definition of middle-range theory and discusses its development and application by archaeologists. Relevant components of MRT such as ethnographic analogy, ethnoarchaeology, experimental archaeology, taphonomy, and uniformitarianism are addressed, and some representative case studies are presented.