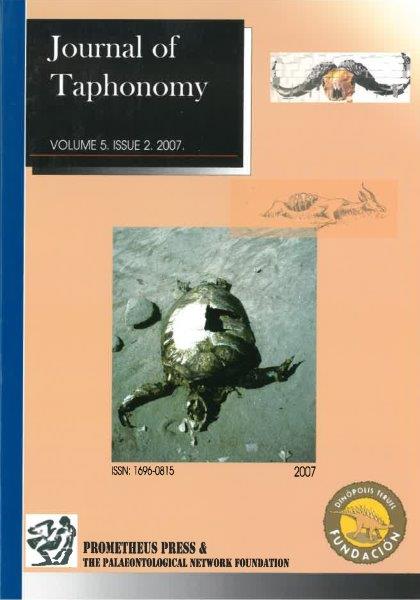 Grey fox (Pseudalopex griseus) scats deposited in the immediate vicinity of guanaco (Lama guanicoe) carcasses were analyzed to evaluate this carnivore´s transport of bones. Samples were from the arid, semi-desert Río Negro Province, Argentina, where the annual mean temperature (15ºC) varies widely with the season. Rates of breakage, the presence of tooth marks and digestion traces on bones from scats were analyzed to categorize the taphonomic signature of the small grey fox. The values of the modification variables used in the categorization indicate that the grey fox (Pseudalopex griseus) may be considered a Category 5 predator.

Taphonomy of the Oxfordian-Lowermost Kimmeridgian Siliceous Sponges of the Prebetic Zone (Southern Iberia).

The siliceous sponges in the Oxfordian-lowermost Kimmeridgian deposits of the Prebetic were important rock-forming organisms, and the most important in the spongiolithic lithofacies group. The siliceous sponges were in several cases the main component in macroinvertebrate assemblages. This taphonomic analysis shows the sequence of processes that occur in the fossilization of siliceous sponges.
As soon as the sponge is dead, the fixation to the substrate is weakened and currents or organisms can tilt and overturn the sponge. The decay of soft tissue led to the precipitation of automicrites (possibly influenced by sulphate-reducing bacteria); at the same time skeletal silica dissolves where, later, the calcitic cementation is produced. Afterwards, the sponge remains were bored by lithophagous bivalves and colonized in the upward surfaces by benthic microbial communities and nubeculariids, and secondarily other foraminifera, whereas downward surfaces were encrusted by annelids (serpulids and terebellids), sessile foraminifera (Tolypammina, Subdelloidina, and Bullopora among others) and bryozoans. Local fragmentation of sponges and their encrustations formed the tuberoids, which behave like an intraclast subjected to transport and encrustation.

A Multidisciplinary Approach Reveals an Extraordinary Double Inhumation in the Osteoarchaeological Record.

An exceptional archaeological discovery from the Muslim Baza necropolis is reported. An unusual double inhumation presents a complete skeleton of a pregnant woman close to childbirth time, and the skeletal remains of a fetus located between her femora (i.e., outside the abdominal or pelvic area). A first osteological review showed a complete fetus skeleton apparently disconnected. However, a deeper evaluation of the material revealed a more articulated state without signs of any taphonomic alterations or scavenger marks. On the one hand, ancient Muslim traditions suggest that if a baby dies during pregnancy or in premature childbirth, but the mother survives, the baby must be extracted and entombed individually. On the other hand, both skeletons do not present evidences of obstetric problems that could explain unexpected labour complications. Therefore, in the case reported in the present work, it is clear that the mother died before or at the same time as the baby, and she was entombed with the baby inside. A multidisciplinary revision of anthropological, archaeological, taphonomic and cultural data obtained through literature, has been combined with recent data extracted from decomposition experiments (i.e., actuo-taphonomy). This heuristic scenario has allowed us to build a parsimonious hypothesis in which such an unusual location of the fetus remains could be explained by analyzing the known steps in taphonomic-forensic dynamics. It is argued that before both corpses were finally skeletonized and covered with sediment, the mother corpse accumulated gas due to organic tissue degradation, and ejected the fetus remains out of the abdominal cavity.