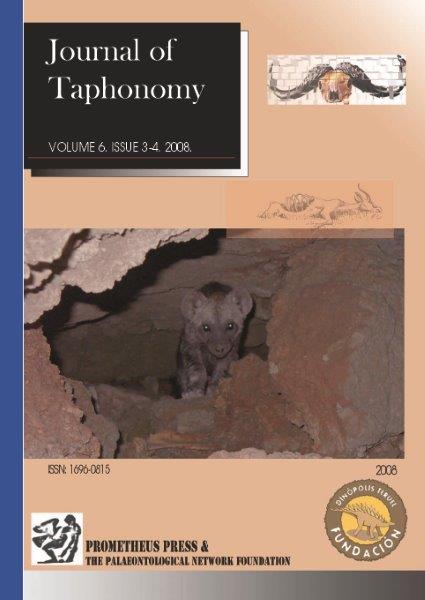 ARCHAEOLOGY ARCHAEOZOOLOGY BARN OWL BIOSTRATINOMY BIOTURBATION BONE BONE ACCUMULATIONS BONE DENSITY BONE SCATTERING BONE SURFACE MODIFICATIONS BUTCHERY CARNIVORES CAUCASUS COMPUTERIZED TOMOGRAPHY CUT MARKS DECOMPOSITION DIAGENESIS DISARTICULATION EXPERIMENT EXPERIMENTAL TAPHONOMY FAUNAL ANALYSIS FAUNAL IDENTIFICATION FLUVIAL ACTION GAZELLE HIGH DESERT LEVANT LOCAL FAUNA METRIDIOCHOERUS MICROMAMMALS MIDDLE PLEISTOCENE MODERN HUMANS MULTIVARIATE APPROACH NEANDERTHALS OCCLUSAL WEAR PLEISTOCENE SEASONALITY SITE FORMATION PROCESSES SKELETAL PART PROFILES SKELETAL PART REPRESENTATION SUBSISTENCE TAPHONOMY TOOTH MARKS UNGULATES VERTEBRATE TAPHONOMY ZOOARCHAEOLOGY
Page load link
This website uses cookies to improve your experience while you navigate through the website. Out of these cookies, the cookies that are categorized as necessary are stored on your browser as they are essential for the working of basic functionalities of the website. We also use third-party cookies that help us analyze and understand how you use this website. These cookies will be stored in your browser only with your consent. You also have the option to opt-out of these cookies. But opting out of some of these cookies may have an effect on your browsing experience.
If you continue browsing we'll assume you're ok with this.